When we made our recent move to Smyrna, Tennessee, I wrote a post about my new city. So, its only fair that I tell you a little bit about the place where I’m living now.  This is St. Cyr en Val.  It’s a typical french village 20 minutes south of Orléans, which is a city most famous for it’s Cathedral and being the hometown of Joan of Arc. St. Cyr en Val has 3,170 inhabitants (census 2009) who call themselves St. Cyriennes.

There are a few bakeries, a post office, church, convenience store, car dealership, pharmacy and two restaurants, both of which I have never seen open (welcome to France). Yes, it’s pretty small. However, while out for a run one afternoon, I discovered the village (like our home in Smyrna) also has a picturesque little river. 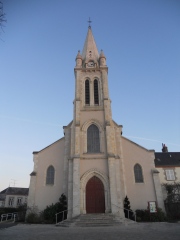 The church shown is where Fabien and I will get married (again) this July. Nearly every hour during the day, I can hear the church bells play from my bedroom. On Christmas Eve, they played my favorite Christmas song ‘Carole of the Bells’. Even though it was freezing, I opened the bedroom windows and shrieked with excitement. This is also the church where Fabien’s mother had her baptism, communion, confirmation and wedding. Now, it’s Fabien’s turn to complete the quadfectra.

In addition, the village is full of family history. His Grandparents, Jean-Claude & Raymonde Godin, are very well-known and loved throughout St. Cyr. The first time I came to France, Jean-Claude told me stories of when he was young and saw the American soldiers come into Orléans during World War II. Jean Claude’s father, René Godin, even has a street named after him.  When René Godin died, he gifted land to his family, which they used to build houses. So, the Chevrier’s live directly behind Corinne’s sister, Valerie, right next door to her brother, Gilles and down the street from her parents who live next door to her other brother, Eric who lives next door to Corinne’s other sister, Veronique. Got all that? Most of you will remember Veronique as the crazy Aunt at from our wedding who ran around taking pictures and speaking french to everyone who only spoke English. Well, can you imagine what it’s like to live in a whole village of crazy French people like her? FUN is the answer! But in all honesty, it’s quite amazing how many family members are in close proximity and how know one is in each others business. They each have their own lives and reserve the weekend for little visits.

I really can’t thank the people in St. Cyr en Val enough for how friendly and patient they have been. Often, I butcher their language while asking for items at the convenience store, but they just give me a gracious smile and hand me what I was asking for where as in a bigger city, I might be considered a nuisance. Overall, the family and residents of the village are the reason I am loving small town life in France.

Oh, and St. Cyr en Val is one quick ride away from this little vacation cottage of Francois the 1st that I visited last weekend (for more pics, click here):