OMG – I can’t believe I’ve been in France for nearly 6 months. The first 5 flew by, but because I had no classes and no trips planned, May itself seemed like another 6 months. With homesickness kicking in, I was determined to keep myself busy. So, I spent my last weeks studying for my big exam and having last hurrahs with friends and family.

So, this exam – the DELF – diplôme d’études en langue française. I was going for Level B1, which indicates I am “an independent user of the French language.” The certification is internationally recognized and never expires.  Over 2 days, I would be evaluated on oral/written comprehension and oral/written expression.  The first day would be my individual evaluation where I would have to talk for about 15 minutes on various topics of the examiners choosing. It doesn’t sound difficult, but when your language abilities are limited, it is quite a challenge. Fortunately, I think I did good. Then the 2nd day consisted of oral/writing comprehension and writing expression. Again, I think I did well, but ran short on time considering there was only about 2 hours to write an essay, read 2 articles, listen to 3 texts and answer about 25 questions.

Regardless of the results, I am extremely happy with my level of french. I was quite naive to think I would come to France and leave in a fluent state 6 months later. This process has only made me realize that it will be a life long process. However, I can speak and understand well enough to get by independently. Goal achieved.

Once my exam was out of the way, it was time to bid farewell to my classmates, friends and family.  I spent my last two days in France with the American gals in my program. They were all staying a bit longer but were heading off to other places in Europe and this was the last time we would all be in the same city. So, the day of the exam, we had a cheese party in the park to celebrate the official end to learning in France. We ate and drank wonderful wine and cheese until they kicked us out of the park at sundown. Then the next day, we pretty much did the same thing along the Loire River. It was a fun time and a great farewell to them and France:

Our last day on the Loire together. From left, Madeline (Clarkston, Michigan), Angela (Hawaii), Me, and Katie (Rochester, Michigan)

The end of the year party at school was in the beginning of May.  My group at the University was really nice and I am extremely grateful to them for making me feel so welcome. Most of them began in September and had a much higher level of french. However, they were always patient with me and part of the reason my level grew so quickly. 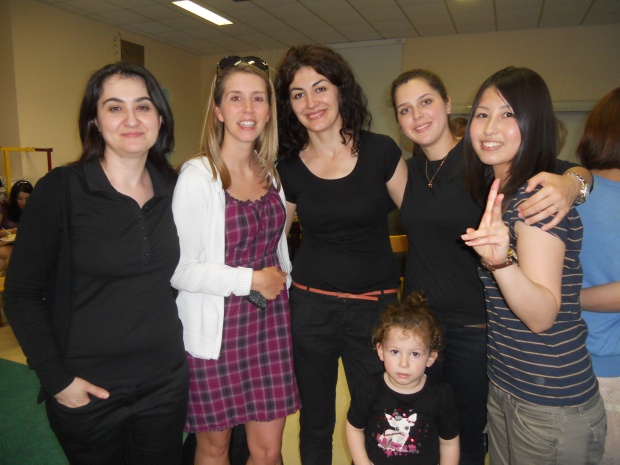 End of the year party at the University. From Left: Keziban (Turkey), Me, Emina & her daughter (Serbia), Alisa (Serbia) and Maria (Japan).

Also, on our last day of classes, our group went on a field trip to Chateau Chamerolles. We had a tour guide and I was pretty fired up when I understood 99% of what she was saying. It was also a great time spent with my classmates. Here are some pics:

The adorable Kako, from Japan 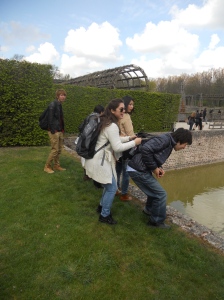 And the whole A Team (minus Hala)

So, this chapter comes to a close. I will be forever grateful to my husband and his parents for making this opportunity/adventure possible. Corinne and Jean-Paul treated me like their own and I am so lucky to have in laws that I not only like, but love to be around.  They are so much fun and were so wonderful and patient with me.  Never, in a million years did I think I would live in France and learn to speak french and I can not thank them enough.

Now we are changing directions – from language learning mode to getting married (again) mode. Oh the blogs (or books) I could write about getting married in a country where you don’t understand the language, process and the rules of the Catholic church. But, until July, I’m headed back to the States for some much needed quality time with Fabien, Bear, Cally and my family in Michigan. Alors, à plus tard, France!

To say I am fired up (but equally nervous) for Friday’s Spain departure is an understatement. While I’ve done a fair amount of traveling, I’ve never totally flown by the seat of my pants like this. Really, the only part of the trip that is planned is my train ticket to the little village of St. Jean Pied de Port which is the starting point of El Camino de Santiago (the Frances Way).

After paying 62€, my one-way ticket goes like this: Orléans, Tours, Bordeaux (via the TGV which I’ve never taken before), Bayonne and finally St. Jean Pied de Port. I leave at 7am and should arrive around 4pm if all goes as planned. Yes, know it’s a long day, but I’ve never really traveled by train and I felt like this was just another part of the Camino experience.

I have spent all week preparing my backpack so it’s under the 6kg (about 13lbs) recommended for my body size.

One big question mark is the weather. For the past few weeks, it’s been nothing but rain. The reason I am worried about this is the whole fact that I’ve never actually climbed a mountain before, which is what you do the first day from St. Jean Pied de Port to Roncesvalles (about 25km or 15 miles). This part is known as the most dangerous section should it be snowy (unlikely) or foggy (maybe). So, if that is the case, I will forgo the experience of crossing the Pyrenees and take a bus to Roncesvalles.  As of now, it looks like the rain will continue through the weekend, but after that, it’s clear and sunny skies for a couple of days. So, what I’m hoping and praying for is that the weeks of rain will turn the Spanish country side into a beautiful shade of green, like this:

A little taste of what my first day of hiking will look like.

Other than everything above, I have a guide-book and money, which I’ve found speaks wonders in tricky situations. Otherwise, I’ll just have to have faith that St. James will take care of the rest and lead me in the right direction.

Until my next internet connection, Adios!

If you’d like to read more about the Camino, check out this site: http://www.caminosantiagodecompostela.com/

Friday after I finished classes at noon, I was off to Paris to spend the weekend with Marjorie. This weekend was especially exciting because it would be my first time in the city when it wasn’t gray, cold and freezing. So, of course, within moments of arriving, we hopped on the subway to walk around the Jardin du Luxembourg.  It was a beautiful afternoon and the place was packed with Frenchies soaking up the sun. We spent the rest of the day walking around and then at a bar listening to 4 different bands.

Spring is in full bloom in Paris

Saturday, we slept in late and awoke to the Paris I know and love – cold and gray.  This called for brunch, which is the new, fashionable thing to do in Paris. There’s nothing like paying 22€ (about $30) per person for 1 coffee, 1 juice, 1 egg, bread, a bagel and fruit to remind you of how expensive Parisian life can be. So, because, we had a lot of carbs to burn  and it was gloomy, we decided Père Lachaise Cemetery was a perfect place to spend the afternoon.  This is where you will find (literally) thousands of tombs stacked on top of the tombs of Édith Piaf, Jim Morrison, Frédéric Chopin, Gertrude Stein and many other famous french people.  Père Lachaise has that dreary, beautifulness that is (sometimes), so Paris.  We were surprised to find a number of recent burials which only made me wonder, how does one get buried at Père Lachaise?  Well, basically you must put yourself on the waiting list and be living in Paris when you die. It also helps if you’ve lived in the city for a long time and if you are a french citizen. But even if you “get in”, you can only rent space for 10-50 years until they “get rid of you” and re-lease it to “someone else”.  People buried in the 19th century were lucky enough to have bought their space for perpetuite (forever).  This process makes me laugh because it is so Paris.  Unfortunately, we were trying to save our feet for Sunday’s marathon, so we didn’t explore too much, but I did manage to see the grave of Jim Morrison. 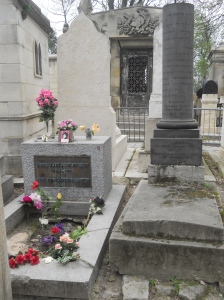 The grave of Jim Morrison

After our afternoon with dead people, we returned to Marjorie’s apartment and got ready for a party to celebrate one of her friends birthdays. Even though I was a tad shy because of my language ability (or lack there of), I still managed to have a good time and talk (mostly in french) with a number of people. I am grateful for Marjorie and her friends being so patient and gracious with me. This is evidence that Parisians can, in fact, be very warm, welcoming people. However, the most exciting part was not practicing my french, but the apartment where the party was held. I tried to play it cool, but I couldn’t help but totally freak out when the I looked out the living room wall of windows and saw a perfect shot of the glittering Eiffel Tour.  Please, someone pinch me.

We didn’t stay too late because Sunday we had to wake up early and head to Fontainebleau for the marathon. Apparently, Fontainebleau is to the Parisians as the Hampton’s are to New Yorker’s. Really, the place is totally adorable. After picking up our race numbers, we had lunch and walked around a little to look at the magnificent Château. In my opinion, this is the best castle I’ve seen in France so far (yes, even better than Versailles).

When the race began I really tried not to focus on running, but to focus on soaking in the ambience and beautiful views. I took this time to think about how much has changed in my life since my very first 5k race 9 years ago. In 2003, I never dreamed that within the next decade I would have run several half-marathons, a full marathon and let alone a race in the French countryside. I ended up finishing in 2 hours and 19 minutes. Not too bad for my one run a week training schedule.

After the race and looking pretty good!

As you can see, I had an absolutely fabulous weekend and can not thank Marjorie enough. I’m sure all of you are a little sick of hearing stories from France so on Friday I am jetting off to London for the long weekend with the Chevrier’s. Pictures and stories to follow!