We arrived home from a wonderful couple weeks in Europe late January 3rd. I was eager to jump back into my daily routine of yoga, writing and freelance projects, however, before I could unpack my suitcase and enjoy sleeping in my own bed, it was time to leave for my last PRRT in Houston on January 8th.

I sat on the plane in disbelief I was traveling again, let alone to cancer treatment – I’m four years in and wondering when the shock will dissipate. That and the fact that Donald Trump is President are the two things I still can’t wrap my brain around sometime. But, I put my big girl panties on and hopped to it.

Wednesday morning I walked to Excel Diagnostics for a check-up and scans of my abdomen, chest and kidneys. I hate these days not just because of the obvious, but also because these tests require I fast. Also, I’m pumped full of contrast fluid that leaves me dehydrated and with a yucky taste in my mouth. This time took extra long because the staff at local oncologists office could not access my port. After two unsuccessful stabs in the chest, they sent me to the interventional radiologist in the building because, in their opinion, the port had flipped. This angered me because, I’ve had my port for two and a half years without having a problem getting it accessed anywhere…except their office. It’s a bit unusual for a Neuroendocrine Tumor patient to have a port, but I got mine due to terrible, tiny, magically disappearing veins. Pre-port a simple blood draw usually meant 4-5 sticks, leaving me traumatized so the port has been a handy tool for someone who gets frequent blood draws. Back at the interventional radiologist’s office, they had me disrobe and hooked me up to an ultrasound machine where I was stabbed two more times in the chest. The fourth unsuccessful access left me in tears prompting them to numb me with lidocaine. Attempt five was successful and their ultrasound machine confirmed the port did not flip making the two-hour long traumatic process completely unnecessary, in addition to making me late for the rest of my appointments. And have I mentioned that I’m not allowed to eat until all the scans are complete? That didn’t happen until 2pm and hangry was an understatement. Fortunately, my husband had lunch hot and ready for my arrival back at the hotel. Smart man.

Thursday was therapy day, which did bring on some manageable nausea. This was easier to deal with after Dr. Ali explained my scans are continuing to show shrinkage. Woot! Woot! I haven’t calculated the percentages, but the doctors are thrilled with my response. He explained the next step would be to return in three months for a Gallium-68 scan.  The hope is that the medicine will continue to shrink the tumors even after I’ve concluded the therapy. They have seen shrinkage in patients up to a year, post-therapy. Basically, keep the prayers and good vibes coming my way as I move into this period where I’m no longer taking pro-active steps against the disease, which can be unsettling.

Friday, we returned to Excel Diagnostics for one last test to confirm the medicine is in place. I also nerded out with Dr. Ali about a new clinical trial they announced that week called Targeted Alpha Therapy. He described it as similar to PRRT, but instead of breaking down the cancer cell piece by piece, the radioisotope destroys the entire cell – at least it has in the animal tests researchers have conducted. The trial is in phase one where the goal is to find the appropriate dosage. Currently, it is not open to those who have received PRRT, but they hope to explore this in later phases. So, if you are a NET patient and interested in learning more, shoot me a message and I’ll share the contact information of the Excel Diagnostics Therapy Coordinator.

By mid-morning, we were on our way to the airport and hoping our flight would land as scheduled due to the snow and ice storm hitting Nashville that afternoon. Fortunately, all went as planned and we were home in our jammies by the late afternoon watching a rare, Nashville snow fall through the windows of our bonus room. 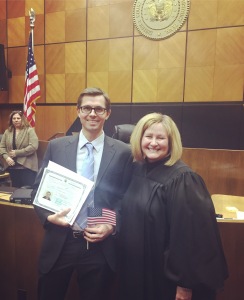 I confess, the following days were filled with lingering nausea, Netflix binges and many, many naps. The only interruptions to this schedule were a trip to Vanderbilt for my Lanreotide injection and a long-awaited court date where my husband (finally) became a naturalized US citizen.

It may have been the accumulation of traveling with the therapy, but this last treatment took more recovery time that numbers two and three. As usual, I powered through and found myself back on my yoga mat, kicking ass by post-therapy day number ten.

Two weeks and one day after my final PRRT, the FDA (finally) approved this treatment, which is a huge milestone for the Neuroendocrine Tumor community. I had anticipated this day after my contact at the FDA reached out last fall searching for my input since I am the NET Patient Representative. Unfortunately, because I was currently undergoing the treatment, I was deemed to have a conflicting interest and therefore not permitted to participate in the approval hearing. Oh well. I am thrilled that more patients will now have access to this therapy without having to travel across the world or country and that insurance companies should (hopefully) begin covering the cost.

With my health back on track, I figure it was time to do something special for myself. This post has been pre-scheduled because from January 31st – February 11th I am off to a Vipassana meditation course in Jesup, Georgia where I’ll be meditating for ten days, 11+ hours a day, with no talking or distractions such as books, journals or smart phones. I know – I must be crazy?!?! I first learned of this meditation technique during my yoga teacher training in the summer of 2016. However, since then, my meditation practice has been sporadic and inconsistent, at best. I know I should do it, but always find an excuse not to. I’m trying not to enter the experience with too many expectations, but my intentions are to (1) make myself mentally stronger, (2) release repressed stress that is disserving my body and (3) detox from my technology addiction. BUT, we’ll see what happens and I look forward to sharing my experience and insights with you. To learn more about Vipassana meditation, click here.