To conclude the Greece series, I thought I would give you a visual treat.  While island hopping, I became slightly obsessed with taking photos of the adorable animals.  Actually my husband was pretty annoyed with it, but you can’t look at this slide show without being a little jealous of them.  Mark my words, when I am reincarnated, I want to come back as a cat or dog on the island of Santorini.

Santorini has been at the top of my travel list since forever and I was beyond thrilled when Fabien agreed on Greece for our honeymoon destination. I spent a lot of time researching where to stay, how to get there and what to do since I wanted the 5 days to be absolute perfection. Coming from Crete, Santorini had big shoes to fill.

The boat ride in was less climatic that I had expected. Actually, the rough water made me a tad queasy and I pretty much slept until we arrived. After finding our sketchy transporter, we drove 40 minutes to the traditional village of Oia (pronounced e-ah). We were then handed off to another transporter who took our luggage and guided us through the streets which have no names, rhyme or reason. The only negative statement on the travel websites about our hotel  was that there were a lot of stairs. It’s true, but it helped balance all of the wonderful food we were eating. When we finally made it to the hotel, the proprietor met us at our room, which had the very best view in all of the hotel. The room was totally, undoubtably, hands down the most AMAZING place we have ever stayed. My research had paid off.

The view from our terrace 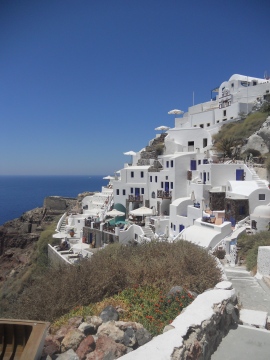 We spent the first day and the next eating lunch at the Amoundi Bay which was 300 steps below our hotel, swimming in the pool, watching the sunset and having a late dinner. Watching the sunset in Oia is a must do while on the island and we were so lucky to have the best seat in the house. There was a landing just above our hotel where hundreds of tourists would claim their spot hours before sunset. It is so amazing that people actually clap and cheer each night when it’s finished. We used this time to play cards, have a drink and a little something to eat before dinner. 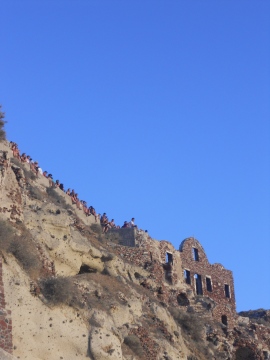 Other tourists getting ready for sunset 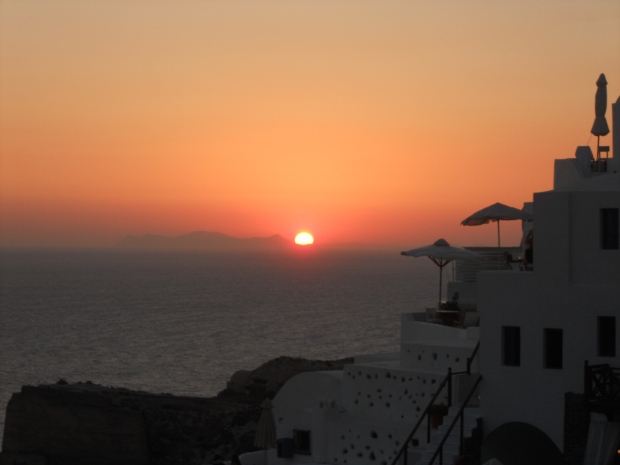 After a couple of days of being lazy by the pool, we decided to rent a 4-wheeler and explore the island. We went to various beaches and towns and both decided we were so happy with the place we had chosen to stay. Santorini isn’t known for great beaches and I would agree that they were just ok. Below is a pic of my favorite, Red Beach. Another one where you have to take a boat or hike over rocks and cliffs for access. Hiking (yet again) to Red Beach

Another day, we chartered a boat and went to the volcano. That was pretty cool. After the volcano they took us swimming in the hot springs and then to another island across the way called Thirisia.

Who wears white to a volcano? We do! 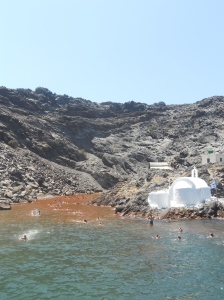 After doing all that, we had pretty much done and seen it all. Our last couple days continued with this pattern: breakfast, swimming in the sea, lunch, lounging by the pool, sunset ritual, dinner, repeat.

Really, I could spend a week just laying by the pool and looking at the beauty of Santorini – it’s just that amazing. However, three days would have probably been sufficient. Below are my two favorite photos from Santorini and you can also click here to view the entire Santorini album.

My favorite pic of the trip

Couldn’t you just look at it forever?

I can’t really say what I expected from Crete. Honestly, I can’t even remember why we chose to go there other than it was on the “Greece Honeymoon” template of our Honeyfund account. Whatever, it doesn’t matter – Crete is now one of my favorite places and a true hidden gem.

We arrived after a 30 minute flight from Athens to a very mountainous island. I booked a rental car from a local agency and that was an experience in itself. The broken English and unclear rental terms made us really nervous. So, we decided it was better to not leave a paper trail – we opted to pay cash and they agreed. Very trusting those Cretans.

Without a GPS, it was actually pretty amazing we found our hotel in the adorable Venetian port town of Chania (the 3rd largest city on the island). In hopes that we would be given a little extra treatment, I was sure to let all the hotels we booked know it was our honeymoon and the Ifgenia Suites hooked us up. They upgraded us to their “penthouse suite”, which included the entire roof top as our patio, two terraces, a jacuzzi and a bottle of local wine. All for the price of 60€ per night. Already, Fabien loved Crete.

After a quick lunch, we loaded up the car and headed to Elafonisi Beach.  The drive was absolutely beautiful and completely terrifying.  Single lane, curvy roads, where if, by chance, an oncoming car comes along, you have to play chicken. Loser goes over the cliff. So, if you’re going to Crete and renting a car, don’t forget your Xanax.  However, arriving at the beach, was totally worth risking our lives because it was bee-u-tay-full! What do you think?

So, we spent a few hours lounging, drinking milk shakes and swimming in the beautiful water. We then went to Falasarna, a west coast beach where we would watch the sunset.  It was another terrifying drive and the only way I could prevent an anxiety attack was to shut my eyes after a while, but when I opened them, this is what I saw:

I didn’t take this pic because of the sheep, I took it because I was so happy to see a guard rail.

By the time we made it back to Chania, it was 9pm and we were starving. There were many restaurants with amazing views of the water and we quickly chose one that offered salad, wine, a platter of greek meats, potatoes and dessert, for 2 – all for 25€. Again, my cheap husband loved Crete. Also, after every meal, there was complimentary Raki and watermelon. If you’ve never had Raki before, I’m guessing it’s the equivalent of moonshine. One taste was one taste too many for me, so we politely declined going forward. From this point on, each night we would walk along the port, looking for these kind of specials.

The next day was like the previous. Scary car ride to an amazing beach.

Prevali Beach is also known as the one of islands best, but you have to work for it. The only way to access the water is by hiking or boat.

On the third day, we had arranged to take the public bus to hike Europe’s deepest gorge, the Samaria. Now, if I thought being in the little car was scary, the bus was ef-ing scary. I thought that surely there was a highway or a bus route that didn’t include oncoming traffic. Wrong. But I did appreciate how the bus driver beeped his horn before going around every curve in warning to other drivers. Safety first. And so we hiked the gorge. I’m happy we did, but I’m not sure I’d do it again. After spending 2 weeks, walking in Spain, I think I am officially walked out and over 5 hour hikes for a while. But, Fabien loved it. 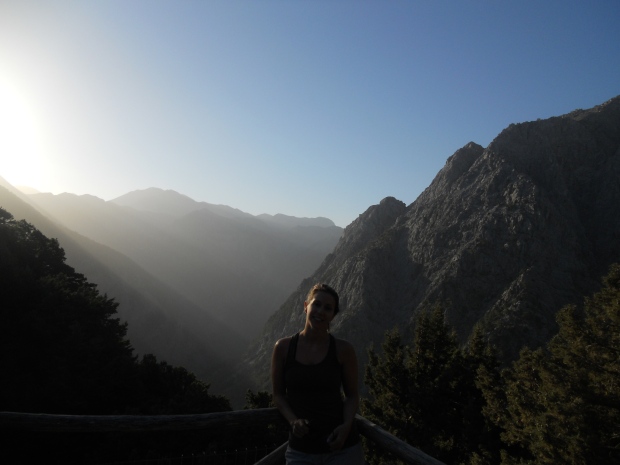 At the bottom of the gorge

At the end, we arrived in a cute little town and the hottest beach on earth. By this I mean the black sand was so hot that you needed shoes just to get in the water. This was the first time I ever thought, “It’s too hot to be at the beach.” The only reason we stayed is because we had to take a ferry back, which didn’t leave until 5pm. Good old European efficiency.

The fourth day would be our last full one on the island. The next day we would be taking a boat from the Cretan capital of Heraklion to Santorini. So, we spent the day driving to Heraklion and stopping at some little towns along the way.

Looking back, we both wish we had more time in Crete. We really just scratched the surface of the amazing island. The prices, beaches, friendly locals and amazing food are simply too hard to beat. If you are ever thinking of going to Greece, do not miss Crete.