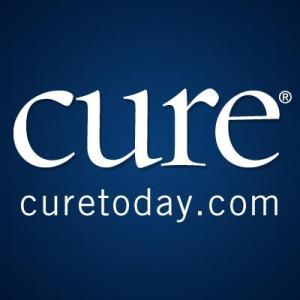 Over the summer, a friend asked if I read, Dr. Paul Kalanithi’s memoir, “When Breath Becomes Air”. I had not, but look it up and was immediately flooded with anxiety. A 35-year-old neurosurgeon diagnosed with advanced stage lung cancer’s thoughts on life and dying. Deciding the book was to close to home,  I added it to my list of 2017 fear conquering goals. Only the book wouldn’t go away and appeared on my Amazon recommendations and in the front section of every bookstore I entered. I concided and purchased it because I felt like the universe was telling me to I needed to read this book and I’m glad I did. 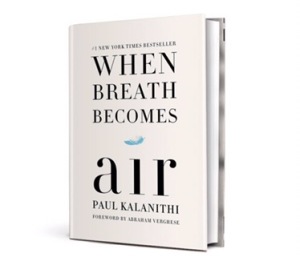 Before getting into the major takeaways, it should be acknowledged from a writing standpoint, Dr. Kalanithi “spun gold”. He strung his story together with complexity, elegance and creativity and it’s no doubt he found his true callings by being both a writer and a doctor.

In terms of his disease, I feel being a physician was a blessing and a curse. Obviously, he was knowledgeable to the medical and scientific aspects, often to a fault.

“I began to suspect that being so close to the fiery light of such moments only blinded me to their nature.” He knew enough to ask his oncologist the Kaplan-Meier survival rates and his oncologist knew enough not to answer, but that he would look them up on his own.  Eventually, Kalanithi realized, “detailed statistics are made for research halls, not hospital rooms,” a philosophy I wished more doctors adopted.

At the debut of his illness he appeared to struggle and eventually come to grips with the emotional, mental and spiritual aspects of disease.  I’ve come to learn these are some of the biggest oversights by our doctors. Call me naive, but I’m a firm believer in positivity and faith and I think Dr. Kalanithi discounted these aspects early on, but eventually confronted them, when he said, “Science may provide the most useful way to organize empirical, reproducible data, but its power to do so is predicted on it’s inability to grasp the most central aspects of human life: hope, fear, love, hate, beauty, envy, honor, weakness, striving, suffering, virtue.

Between these core passions and scientific theory, there will always be a gap. No system of thought can contain the fullness of the human experience.”

I think “When Breath Becomes Air” should be annual reading for doctors if only to have both a peer’s and patient’s insight into illness.  Dr. Kalanithi explained,“How little do doctors understand the hells through which we put patients.” Also, to reaffirm, “Doctors invade the body in every way imaginable. They see people at their most vulnerable, their most scared, their most private. They escort them into the world, and then back out. Seeing the body as matter and mechanism is the flip side to easing the most profound human suffering.”

Throughout the book, there were many relatable moments. Early on when Dr. Kalanithi said, “Severe illness wasn’t life-altering, it was life-shattering,” and “Even when the cancer was in retreat, it cast long shadows.” And the most relatable theme for me personally – the biggest fear not being death, but leaving a spouse alone and “promising her one life and giving her another.”

Unfortunately, Paul Kalanithi passed away while writing this book, but in my eyes, it’s actually quite complete. His widow wrote the epilogue and beautifully summarized their journey through illness, “Although these last few years have been wrenching and difficult-sometimes almost impossible-they have also been the most beautiful and profound of my life, requiring the daily act of holding life and death, joy and pain in balance and exploring new depths of gratitude and love.”

Now, if you haven’t read, “When Breath Becomes Air”, go out and buy two copies – one for you and one for your oncologist.

Read all of my articles with Cure. 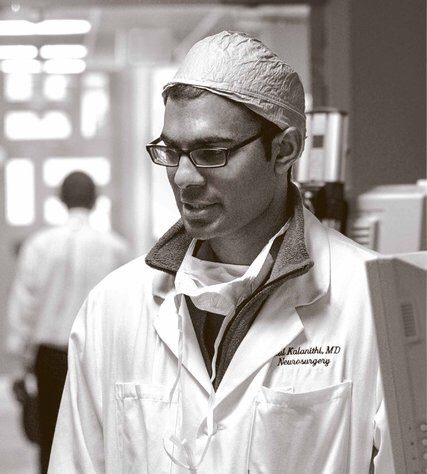