The bipolar days continued. From Santo Domingo to Belrado, it was a long 23km and I was whipped upon arriving to town. Then, the next day (from Belrado to Ages) was 29km and I had energy to spare.  It was the longest distance I had done, but one of the most fun days.  It went like this: 5 minutes of rain, 5 minutes of sun, 5 minutes of uphill, 5 minutes of down hill and hours of laughs between Audrey & I. At one point when we were on the mountain top we could see the rain in the distance. It was really cool. However, later that night, as I laid in bed, my legs throbbed like never before. “Why are you doing this to us?”, they begged. I responded, “You guys just need to make it through one more day.”  Yup, tomorrow we would walk Burgos and my Camino would end. Sad face. 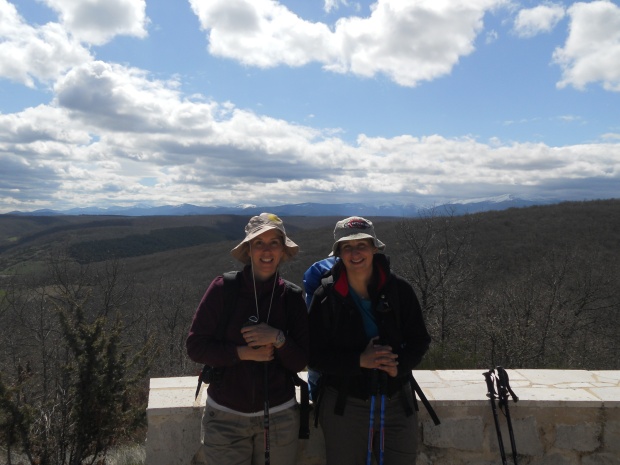 Audrey & I mountain top in our awesomely dorky hats

But, the Camino was not going to let me get away that easy. Before the day’s end, the my experience would come full circle and make the last day almost as challenging as the first. We had added to 2 girls from Australia (Annette & Keely) to our “family” a few days back. So, as the 6 of us walked, we encountered sun, then mountains, then rain, followed by mud and a 10km walk through the industrial area.  Someone mentioned a bus, but I was decided that there was very little that could keep me from walking to my final destination of the trip. So, the team followed me in the pouring down rain as we entered Burgos. Then, when I expected to see the hostel, I saw a sign saying we were still 2.5km away. But then I looked to my left and saw a little slice of heaven – it was Domino’s Pizza. My innate Americaness ran and the group had no choice but to follow me. I ate 5 pieces of pizza and I don’t regret it.

So, after the heartburn faded and I was rested and showered, I started to become very melancholy about leaving. I knew on this journey that I would meet people, but I didn’t expect to meet so many who are amazing, wonderful, fun, friendly, successful and inspiring. Of course, in particular, my original Camino Family. So, let me tell you a little about them. 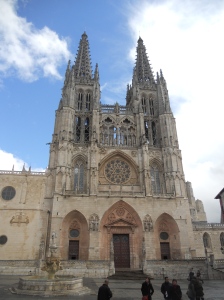 The amazing cathedral of Burgos

So, since it was my last night, I went to the Pilgrim’s mass at, what is known, as one of the worlds most beautiful Cathedrals (I agree).  After, the fam and I went out for a small dinner.  I wanted to make my last night memorable, so at dinner, we played a game where we all wrote down our favorite quotes and then drew another’s to take with us on our journey. Here’s the one I drew:

“The real voyage of discovery consists not in seeking new landscapes but in having new eyes.”   -Marcel Proust 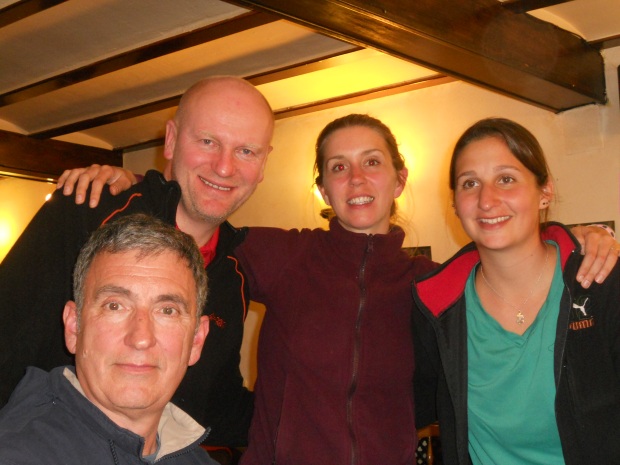 The Original A Team

And so my Camino comes to a close. Saturday morning, I went to the bus station and bought a ticket to France on the overnight bus. To bring my experience even more full circle, I kept running into familiar faces we had not seen in days. It’s like they all came to say goodbye and I could not have been more happy to see their faces and wish them well as most of them were headed to Santiago.

One night, Audrey recommended a book to me called A Million Miles in a Thousand Years.  The book is about the author, Donald Miller’s, quest to improve his life story.  In the beginning, the author talked about how he floated from day-to-day until he realized his life was pretty boring.  The goal of the book is for its readers to evaluate their own story and whether they’d be happy with its chapters when it “ends”.  As I never again, may have hours upon hours to think like I did while I was walking, I couldn’t help but wonder about my own story.  My reflections made me realize that, so far, I am totally in love with my book and this chapter specifically. The Camino has brought clarity to the fact that those free-spirited, adventurous wanderlust butterflies will never go away. They are a big part of my story with Fabien and they will be part of our children’s stories.  I also realized that I must make it a future goal to not float from day-to-day.  Finally, I will forever be grateful to El Camino for giving me one of the most treasured chapters in my story.

A photo album of the Camino’s Greatest Hits can be found here.

Also, previous blog posts have been updated with photos and maps:
4 Days to Pamplona
Getting into the Camino Groove
Camino Highs and Lows
Day 1 on the Camino