As featured in Conquer magazine

This is my first piece with Conquer magazine and one I wrote with hesitation. Not only did I fear judgement, but worried if there would be any legal consequences considering I live in one of the 18 states where medical marijuana is not legal. As I considered these points, I remembered…I don’t care what the law states. When it comes to my health, happiness and productivity, I’ll do whatever it takes (but know that I fully expect someone to start a GoFundMe for bail if I find myself in trouble with this).

I know that marijuana helping cancer patients isn’t breaking news, but it was a game changer for me. My hope is that sharing my story can open someone’s eyes and mind to thinking outside the standard box of pharmaceuticals to improve their quality of life.

In conjunction, Conquer put together this piece on navigating the ever-changing laws regarding medical marijuana: (Almost) Everything You Wanted to Know About Medical Marijuana, but Were Afraid to Ask

Those of us in cancerland know that cancer isn’t always black or white, and the line separating cancer and cancer-free isn’t always thick and dark. We know that the word remission is a bit taboo, so the goal of this post is to educate the cancer muggles on the gray area where this disease can sometimes rest.

After being diagnosed with a pancreatic neuroendocrine tumor in September 2014, I underwent surgeries and treatments until my body showed no evidence of disease (a favorite term among oncologists). I went along for a year, crossing my fingers the illness would leave my life, but also knowing the statistics behind this cancer and that it would probably make an appearance again.

During those months, I was free of any signs of disease, when a questionable spot popped up in my liver. Radiologists debated whether it was contrast build up, a new tumor, but even the tumor board (an oversight committee) couldn’t come up with a definitive conclusion. My (usually very sensitive) tumor marker remained normal, so they threw me into a dreaded strategy of, “watch and wait.”

I asked my doctor, “So, do I have cancer?” and in a nutshell, he said, “I don’t know. Maybe. Maybe not. Go live your life and come back in a few months. We’ll scan you again.”

Three of months later, I was thrilled when the radiology report concluded the previous spot was gone. “Yup, it was contrast build up. It’s resolved, and everything looks good. Come back in a few months.”

And so I did, but this time, one of my symptoms had begun to reappearing and my blood tumor marker was crawling towards abnormal range. To my surprise, the scans were clear. “Come back in a few months.”

Eventually the uncertainty and anxiety became too much to bare. I decided to reach out to a specialist, who told me his hospital had a new, more precise diagnostic machine that would hopefully help us find the source of the symptoms and blood results. The scan uncovered microscopic tumors too small to show up on an MRI or CT. The news was bittersweet. Bad news: I had cancer. Good news: I now had a definitive answer and could move forward with a new treatment plan, which I executed faithfully over the next year.

I tolerated the new therapy well and it barely impacted my life. Those tiny tumors got even tinier and the blood tumor marker became normal again. At the end of the treatment, I was advised to have a precise scan again, so doctors could see the before and after. However, when I did, the radiology report indicated all the tumors were gone, except one that had progressed. My oncologist and I were both thoroughly confused and sent the images to the specialist for another opinion. His interpretation completely opposed that of radiology report – the disease had indeed shrunk and I was classified as a partial response. “Come back in a few months.”

Ever a faithful patient, I did and was happy to have all doctors agree that the disease continued to retreat. “Come back in six months.”

Navigating opposing interpretations of scans, watch-and-wait scenarios and living life in three-to-six-month increments are a few examples of the uncertainties cancer patients experience. It’s important for cancer muggles to know the true complexity of this disease and that many of us who have walked down cancer street are not always strolling on one side of the boulevard or the other. Sometimes we tread, with caution, down the middle of the road, unsure if we should be on the left or right side.

Read my other articles with Cure.

September 1st, 2018 marked four years since I was diagnosed with a Pancreatic Neuroendocrine Tumor.

It was Labor Day weekend 2014 and I found myself in the hospital for the third time in two weeks. Originally sent home with discharge papers listing my diagnosis as, “superbug” (seriously) with instructions that I should drink plenty of fluids and rest. The next day, I felt just as terrible and returned to the emergency room. When they took my blood, my potassium was so low doctors were shocked I had not gone into cardiac arrest. I was admitted and told they would do a CT scan in the morning. I had no idea what a CT scan was or that it’s often used to find tumors. Seconds after returning to returning from the scan, a doctor rushed into my room. “You have a mass on your pancreas, but I don’t think it’s pancreatic cancer. I think it’s something called a Neuroendocrine Tumor that’s producing vasoactive intestinal peptide, but in order to confirm this, we need to transfer you to another hospital where they can do a biopsy.” And the ride began…

In retrospect, I should probably call this doctor and thank him. He hit the nail on the head, down to the one and ten million diagnosis that was, most likely, given a 30 second explanation in a medical school lecture hall decades ago.

Days later as the suspicion was confirmed, a surgeon gave me an (old) research paper titled, “A Needle in the Haystack,” where I read the 5-year survival rate was 50%. While I think this statistic is quite dated, I can’t help but take some pride in the fact that I’m closing in on the positive side of that prognosis. Actually, I’m probably already there given my suspicion that I had the disease a few years before diagnosis.

So, it seems like a good time for an update.

July marked six months post-therapy and usually where I’m told, “It looks like there might be a little something regrowing,” or, “Your tumor marker is slightly elevated,” or, when symptoms start to reappear.

Six months is also the check-point where PRRT is deemed a failure or success. If declared successful, I could be eligible for more of the same therapy in the future, should a need occur.

I walked through these past months distracting myself with a new puppy, going to yoga daily, overbooking my schedule and when I wasn’t sprinting through tasks, telling myself that I was okay and trying not to freak the fuck out. I felt good, but I couldn’t help but brace myself for a routine impact.

I had my exams and fled to California for a week until my results appointment. I tried to forget my fate was sitting in the online records portal. When I returned home from California, I couldn’t take the torturous wait anymore.

The report said stable, but I didn’t believe it. I referred to my spreadsheet where I was tracking tumor measurements. Yes, I have a spreadsheet. I completed my own analysis (as if I have any training to read MRIs) and prepared some challenging questions for my doctor.

He walked into the exam room and cut right to the chase like I knew he would, “Well, your scans look good.” I presented my questions. He answered them. I asked about my blood tumor marker. He replied that it was normal. I asked him to review my images at tumor board just to be sure. He said he would, but there wasn’t much to review or debate. He advised me to come back in four months, a luxury I’ve never experienced. Before I left the appointment, I got a copy of the disc to send off to my doctors in Houston. They agreed that all was well and recommended my next scans take place in six months.

This is all good news and yet, I’m processing it like neutral news. I want to believe it, but it’s hard. What do you mean I can go and life my life for the next six months without so much as an MRI, CT or PET Scan?  It is a strange and welcomed feeling.

So, I guess I’ll do just that – live, as much as I can. This means, more writing, more yoga, more pumpkin spice lattes, more travels (direction South America), more puppies, more, more, more. 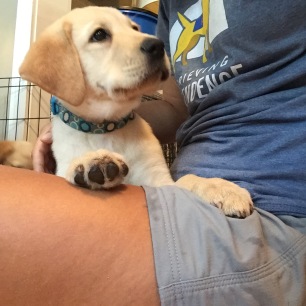