My blog has been quiet lately. I’ve been working on other projects and enjoying fall, which I haven’t been able to do in years because of surgeries. The fun, productive days sailed by and before I could get my fill of pumpkin spice everything, it was time for my 3rd Peptide Receptor Radionuclide Therapy (PRRT).

My pre-tests revealed normal blood counts, a falling tumor marker and no need for short acting octreotide injections. Smiles all around. Therefore, the husband and I decided a weekend of fun was in order before a week of not-fun. 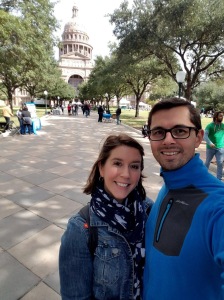 IDK, but I hardly look like a cancer patient, no?

With a late arrival in Austin, followed by a long night of sleep, we ventured downtown Saturday morning for breakfast, a walk to the Texas State capitol and a city Duck Tour. Disclaimer: we’ve never done one of these cheesey tours and I can say with 200% certainty that we never will again. OMG – it was awful. First, it was so damn cold. Second, we didn’t learn anything about the city. Third, the guide’s jokes were not funny. Fourth, they gave everyone duck kazoos, including the kid behind me who has permanently impacted my ability to hear from my left ear. Lesson learned. Newly impaired hearing aside, afterwards, we hit up a local recommended food truck (Torchys) for tacos and they did not disappoint. In fact, I think they were the best I’ve ever had and I am serious AF about tacos. The rest of the day was spent walking around South Congress and 6th Street enjoying the Halloween costumes.

Sunday was warmer and a picture perfect fall day. We rented bikes and rode around the city for hours stopping only for an hour long kayak adventure on Lady Bird Lake. In the evening we ventured outside our comfort zone to a Haunted House, which was good fun.

The following morning we took the Megabus to Houston – queue the jeers and boos.

Early Tuesday I reported to Excel Diagnostics for a full poking (port access), scanning (MRI, PET and Chest CT) and starvation test (I think exit pizza should be legally mandated if you’re forced to fast for anything over 4 hours). I even had to return Wednesday morning for a renal test.

I have to be honest – I was kind of a basket case. These tests were more lengthy than usual because my doctors thought we should do a halfway check-in. While I waited for the results my mind filled with all the worst case scenarios. Fortunately, my husband is very good at talking me off the ledge. But still, scanxiety is a real, tangible thing, people.

Wednesday afternoon we returned for the results. And with much excitement, my doctors shared that I’m tracking at 20% shrinkage. BUT, I re-did their math and it’s actually 22%, so I’m taking the Goddamn extra 2%.

Let me emphasize something, because I understand why some of you might not be impressed with 22% at the half way point – THIS IS HUGE. Medicine has never done anything but stabilize me in the past. Surgery has always been most effective on me, so it feels incredible to have found something that works and doesn’t result in cutting me open.

Later Wednesday night, the Houston Astros won the World Series, so it is with 300% certainty that I say there was some special magic floating around Houston and I am so grateful to have received some of it.

But, the celebration was fizzled because Thursday I still had to be infused and thank God some of that magic from Wednesday carried over because, finally, I avoided nausea and vomiting from the amino acids they give me to protect my kidneys.

Friday, I was back at Excel for a quick scan to reveal the medicine was in place and we headed home to Nashville that afternoon.

The only negative thing that came out of Houston this visit was a cold my husband and I both picked up during our travels. Fortunately, it wasn’t too bad. We pretty much spent the weekend watching Netflix on the couch, ordering take-out, which is probably what we would’ve done anyway.

Once Monday rolled around, we were both feeling better and the only agenda item for the day was a trip to Vanderbilt University Medical Center for my Lanreotide. I’ll admit, I was pretty tired on Monday, but in a psychic stroke of genius I planned my appointment for 6pm, which allowed me to avoid traffic, wait times and rising early, which is no bueno for me. Each day I woke up with more energy and by Thursday, I was fully back to the land of the living. So much that Friday, I went hang gliding for World NETs Day. Read about that here.

Even better, I am officially free from cancer treatment until the 2nd week of January and we are off for fun in the sun and a European holiday.