First things first – this post is going to disappoint you. Fabien & I went to Paris last week for a few days and I may have been the worst tourist in the city. We went to see the Eiffel Tower the first night but it was so foggy, you could only see to the 1st level. We never went back. I’m a loser. Do as I say and not as I do – Paris is not a city to say, “been there, done that.”

But, honestly, after visiting the city a 2nd time, under different circumstances than before (ie. our luggage getting jacked from the car on the first day), I fell in love with Paris. Thank God Fabien is in Tennessee otherwise, it might be really difficult to return to Smyrna after being in this city. There’s just something so beautiful about this place. Just like Owen Wilson in the film Midnight in Paris, I love the way the city looks, at night, after it has rained.  It’s little stone streets. It’s Haussmann buildings. The way everything is so perfectly decorated for the holidays. How the cafés are littered with Parisians sitting outside because they would rather smoke than be warm. I don’t even mind the gritty metro which has a certain smell all its own. I love how things are done for beauty and not because someone wants to build something as cheap as possible. I see why it’s called the City of Lights and known as the worlds most romantic town. However, this visit was not about running around the city like a manic making sure I see every amazing and beautiful site. It was about visiting friends and spending quality time with my husband who would be leaving me soon to return to the States. 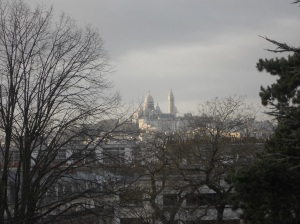 We did manage to pass by a few of my favorites – Montmartre, Arc de Triomphe and Champs Elysees.  Also, I added a few new favorites to the list. Visiting the Galeries Lafayette (see above) and Printemps to see their amazing Christmas displays. Canal Saint Martin where I can invision Amelie throwing stones.  And the best new discovery, the park, Butte Chaumont. I am no expert on Paris, but I am telling you, if you want a beautiful view, go to this park. From the highest point, on a clear day, the view of Sacré Coeur is so stunning it looks as though it’s not even real. In another spot you can see the Eiffel Tower. So, if you only follow one piece of advice I ever give you – go to this park. Don’t waste your time and money going up the Eiffel Tower. I mean, you can’t see the Tower from the Tower. 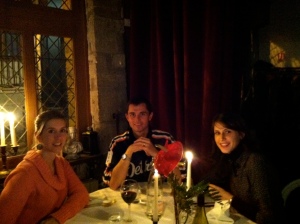 Our goal was met though. We caught up with old friends from US and China who were gracious enough to let us stay in their adorable, little Parisian apartments.

Aside from seeing our friends, spending time with Fabien and discovering some new favorites in the city, the highlight of my trip was the last night when I got to ride in the driver cabin of the Metro. One of our friends manages a line and asked the driver if he wouldn’t mind giving us a lift. I felt totally special and thought it was super cool to see the veins of one of the oldest subway tunnels (established in 1900) in the world with a panoramic view.

I didn’t even take many pictures. So, not to totally disappoint, I included photos from this year and the last time I visited the city. View them here.

2 thoughts on “The Worst Tourist in Paris”